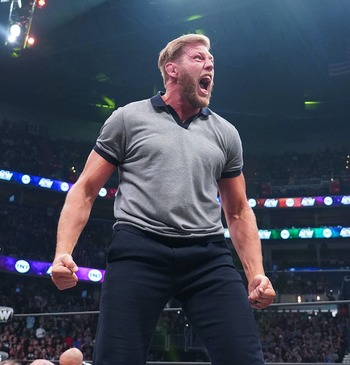 He is not here for "the People" any more...
"I want every real American to please rise, put your hand over your heart and in a loud clear voice say along with us..."
—Zeb Colter
Advertisement:

Donald Jacob "Jake" Hager, Jr. (born March 24, 1982) is an American professional wrestler and mixed martial artist from Perry, Oklahoma currently signed to All Elite Wrestling. He is best known for his tenure in WWE under the ring name Jack Swagger.

Hager attended the University of Oklahoma as a two sport athlete, participating in both football and wrestling. He switched to wrestling full-time in his sophomore year, and in 2006, set the record for most pins in a season with 30 as an All-American. Following a try-out, Hager signed a WWE contract in mid-2006. He made his debut for the WWE developmental territory Deep South Wrestling in September, and was moved to the Ohio Valley Wrestling territory in January 2007. A few months later, Hager debuted for Florida Championship Wrestling (FCW), where he was the final FCW Southern Heavyweight Champion

In late 2008, he debuted for the ECW brand under the name Jack Swagger, and in January 2009, he won his first World Championship, the ECW Heavyweight Championship

defeating Matt Hardy. In March 2010, while a member of the Raw brand, he won the Money in the Bank ladder match at WrestleMania XXVI, and cashed it in later that week on SmackDown, defeating Chris Jericho to become the World Heavyweight Champion

. In January 2012, he won the United States Championship

, defeating Zack Ryder. He was released from the company in 2016.

He debuted in Season 4 of Lucha Underground under the name Jake Strong as a member of the stable Infamous Incorporated, but quickly split from that stable after a disastrous challenge for the Trios championship. He was later revealed to be affiliated with The Order and won the Lucha Underground championship at the close of the Season.

In 2019, he began an MMA career, fighting for Bellator. Although many wrestlers who transition to the octagon tend to fall short on their careersnote For every Brock Lesnar there's one or more CM Punks., he made a good impression on his first fight, where he submitted J. W. Kiser on January 27. Hager followed that up by submitting TJ Jones on May 11. His third MMA fight, against Anthony Gordon on October 25, was ruled a no contest when Gordon was rendered unable to continue by unintentional groin strikes from Hager. His next MMA fight did not come until more than a year later, thanks to his pro wrestling commitments and COVID-19. Hager defeated Brandon Colton on a split decision at Bellator 250 on October 29, 2020.

Earlier in October 2019, Hager signed with All Elite Wrestling and made his first AEW appearance on the debut episode of Dynamite, attacking Dustin Rhodes, Cody, and The Elite and siding with Chris Jericho as a heel, subsequently becoming a founding member of the Inner Circle.

Example of:
Five Moves of Doom