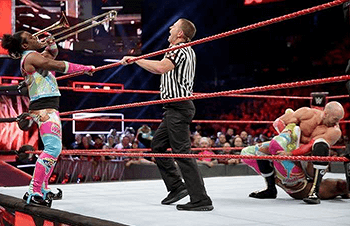 The ref has his head up the brass.
"It takes a special type of person to be a professional-wrestling referee, the type of person who, if he had been present when the Hindenburg was being consumed by a giant ball of flame, would have been looking, with intense interest, at the ground."
— Dave Barry, "Wrestling's First Rule: Cover Your 'Masculine Region'"
Advertisement:

It's a well-known fact that Professional Wrestling referees have the shortest attention spans of any creature in the known multiverse (along with being allergic to contact). They can be distracted by anything; from an argumentative manager, to a pretty girl dancing at ringside, to a turnbuckle pad that appears to be loose, to a particularly shiny object. Wrestling villains often take advantage of the ref's attention deficit, causing distractions and using the opportunity to use illegal tactics (chokes, eye gouges, weapons, etc.) or, in a Tag Team match, to prevent the Ricky Morton from tagging out to his partner. The rule is: if the ref didn't see it, it didn't happen, and it's Not Cheating Unless You Get Caught.

Can be averted or subverted, as Shuichi Nishinaga of Pro Wrestling NOAH once proved in a championship match: when the Heel's attempt to fake the Face champion cheating, his applying of fake blood was noticed by the guy reading pre-match officialese who pointed it out and the referee actually rubbed it away as a result. Compare Glass Jaw Referee for when it's not the attention span that's the issue, it's the fragility.