Literature / Harry Potter and the Goblet of Fire 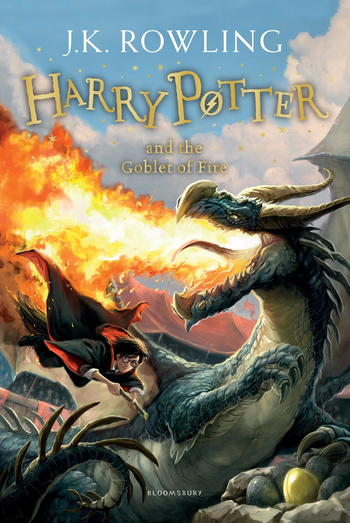 Three schools, four champions.
"You are blinded by the love of the office you hold, Cornelius! You place too much importance, and you have always done, on the so-called purity of blood! You fail to recognize that it matters not what someone is born, but what they grow up to be!"
— Albus Dumbledore

Harry Potter and the Goblet of Fire is the fourth book in the Harry Potter series. Published July 8, 2000, this was the first book in the series to be heralded in with release parties as "Pottermania" took hold.

Following the events of Harry Potter and the Prisoner of Azkaban, Voldemort now has a loyal follower by his side and is making plans to become stronger and regain his body. Meanwhile, before school starts, Harry and the Weasleys attend the Quidditch World Cup. At school, Hogwarts is hosting the Triwizard Tournament against two other schools of magic in Europe, and Harry discovers that he has been selected to compete, even though he is below the age restriction and, contrary to popular belief among his peers, did not apply as a candidate. He begins to fear that he's a pawn in someone else's plan and, simultaneously, becomes slowly more aware of the rising spectre of Voldemort…

This book was a turning point in the series in a lot of ways.

Followed by Harry's fifth year at Hogwarts, in Harry Potter and the Order of the Phoenix. It was adapted into a film in 2005.