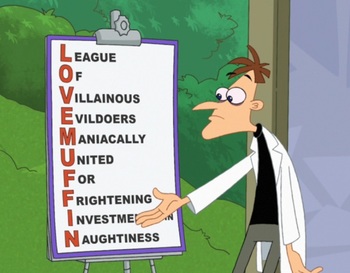 The Tri-State Area's premiere organization for pharmacists.
"Natasha Elizabeth Riley-Dodd will not thank you."
— The Greatest Baby Name Book Ever by Carol McD. Wallace
Advertisement:

Also a Sister Trope to Fun with Acronyms. Sub-Trope of Unfortunate Names. Compare Shoehorned Acronym when the acronym itself is awkward.