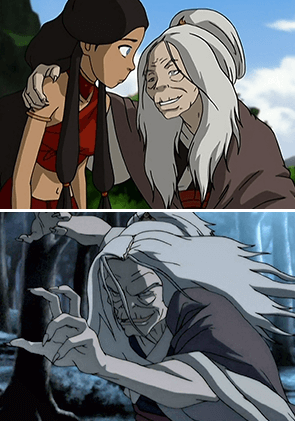 An old villain lures their much younger victim by giving an image of a wise, caring and soft-spoken old man/woman, only to drop the mask and showing their true colors as soon as their target is vulnerable. Expect them to rely on pet names (e.g. "My dear child", "(young) lad", "sweetheart", "sweetie", etc,) to strengthen the bond with their prey.
Advertisement:

Their usual modus operandi is giving their victims a glimmer of hope and yanking the chain soon after. Among the main goals of this habit can be counted blackmailing, getting richer, soul/body stealing or, more simply, pleasure in hurting others. An evil smirk, Freudian Slips or a Traitor Shot are often used to remind the audience the villain is just biding their time and has no intention of mending their ways.

This trope is closely related to Evil Old Folks, Bitch in Sheep's Clothing, Faux Affably Evil, and Manipulative Bastard (while being a form of Nice Character, Mean Actor). Also compare with Bad Samaritan, Bait the Dog, and Evil Mentor.

Given the Plot Twist nature of this trope, even mentioning a work or character may spoil the work, so the major part of the spoilers may be unmarked. Beware.