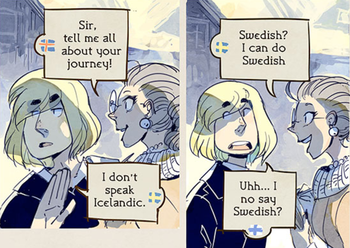 A surprisingly common way to duck out of a possibly uncomfortable conversation is to claim you don't speak the language. It seldom works, but it's often tried.

Common failure points include dropping the "I don't speak X" into the middle of a conversation when you've been speaking X just fine, or making the claim in a language the other person is fluent in and that person obligingly switching to the other language. It's often Played for Laughs. A Completely Unnecessary Translator may be called in to "help".

A subtrope of Language Barrier. Compare to Hiding Behind the Language Barrier, when one person really doesn't speak the language and is deliberately cut out of the conversation as a result. Also compare Elective Broken Language, when a person who perfectly knows the language nevertheless chooses to speak in a grammatically improper or idiosyncratic way.