Our Nymphs Are Different 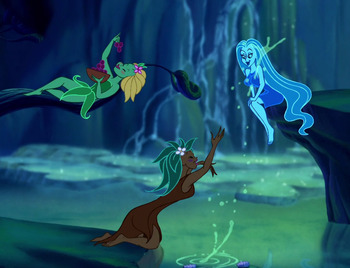 Nymphs are a type of Nature Spirit resembling beautiful women, and typically serve as protectors of nature and the wilderness.

They originate in Greek mythology, where "nymph" generally referred to any minor female deity of the wilderness. Numerous distinct types of nymph were recognized in association with specific environments and landmarks, some of which have become recurrent creatures in modern culture in their own right, sometimes as subtypes of a broader nymph "species" and sometimes as independent types of creatures in their own right.

In Classical myth, nymphs of all stripes were an Always Female One-Gender Race; when they had male counterparts, these were generally either satyrs or male river gods. Some modern interpretations still use this version, generally treating their nymphs as either arising from nature itself in some form or as depending on humans, satyrs or other species for reproduction, but some works choose to discard the Always Female angle and include male nymphs, dryads and the like alongside their female counterparts.

See also Nature Spirit, Earth Mother, Mother Nature, and Water Is Womanly. For the other type of "nymph", see Really Gets Around.