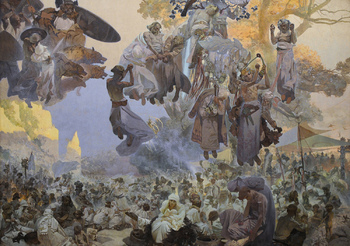 Slavic mythology is the mythological aspect of the polytheistic religion that was practised by the Slavs before Christianisation. It possesses numerous common traits with other religions descended from the Proto-Indo-European religion.

There are no known written accounts of Slavic mythology predating the fragmentation of the Proto-Slavic people into Western Slavs (Czechs, Slovaks, Poles and Sorbs), Eastern Slavs (Russians, Belarussians and Ukrainians), and Southern Slavs (the modern Balkans, that is, Croats, Serbs, Bosnians, Montenegrins, North Macedonians, Slovenes and Bulgarians). Actual historical data can be divided into three: archaeological, ethnographical, and written. The first two tend to have a role in reconstructing the rituals, with the latter — predominantly the chronicles by Eastern Roman scholars, Ruthenian and German monks and some Muslim writers — being the primary source of knowledge concerning the pantheon itself. As with Celtic Mythology, a lot of the written evidence suffers from having been Hijacked by Jesus before anyone thought to write them down.

Exactly what it looked like may be somewhat confusing. Overall, ancient Slavic religion seems to be fairly local and cultic in nature, with gods and beliefs varying from tribe to tribe. Historic sources show that each Slavic tribe worshipped its own gods, possibly even had its own pantheon. Some scholars believed that Slavs' religion actually was focused on daemons and spirits, with the organised pantheon appearing only under foreign pressure. Others have claimed that while there was a single general pantheon, various regions held different gods in high regard. However, through cultural comparisons, linguistic research, and critical analysis of the written sources, it is generally assumed that there was a single Proto-Slavic pantheon from which pantheons of various Slavic tribes originated.

The Slavic religion had semi-nomadic steppe origins, where each geographical direction had a color of its own. Thus, Belarus actually means "the Western Rus", because the West was linked to the color white. (Compare to Byelobog, "the white god", and Belgrade, "the white city".) It appears that it was built upon the dualism personified by two gods, Perun and Veles. Perun was a "dry" sky god, commandeering fire, wind, and lightning (his name means simply "lightning" in Slavic languages). Veles was a serpentine, cthonic, "wet" ruler of earth, water, and magic. To whom the rain belonged was pretty much the "whose is the apple tree on the fence" problem. In some stories, Perun creates the world and Veles accidentally helps him by trying to interfere. Whatever the reason, they constantly fight each other, lightning strikes marking Perun's attempts to kill his foe from the sky. However, despite the easy analogies, Veles was not really a bad guy, as he was also a patron of cattle. (It should also be noted that Veles had a nasty habit of stealing Perun's possessions — up to and including his wife and children — so Perun's rage could be perfectly understandable.)

Another important set of gods were Svarog, Svarožić ("little Svarog" or "son of Svarog"), and Dažbog. The exact relation between the trio is somewhat obscure (or if it was a trio at all); however, Svarog might have been the father of the rest. Whatever the case, their area of competence was the fire — the one in the sky, and the one on the earth (other possibilities include the Moon and sunlit sky). It is important to note that, by some researchers of the Slavic beliefs, Svarog is considered the creator god or the original top Slavic deity — the personified life-giving sky. In an attempt to explain how does this coexist with apparently high status of Perun, it has been theorized that Perun was an evolved aspect of Svarog.

Slavs valued earth and the vegetation cycle; there was plenty of taboos concerning the treatment of the earth before the wheat grew (so, during "pregnancy"), and the end of the winter was a big festival — remnants of it have survived to this day. An interesting one is the tradition of burning or drowning (or both) an effigy of the winter and death goddess Morana on the first day of spring. The Slavic patron of the harvest, vegetation and fertility was Yarilo/Yarovit, while Mokosh or Mother Earth (Mat Zemlya) was the earth goddess herself (and possibly a borrowing from Uralic mythology); Mokosh might have also been a goddess of feminine labours like spinning and weaving.

The four-faced patron of warnote to be honest, almost every other one has been called a war god at a time, divination, fertility, and abundance — Svantevit — is possibly the best-known Slavic deity. However, his status is not correspondingly clear. His worship is most strongly linked with the fabled Arkona on the Rügen Island, last vestige of Slavic paganism destroyed in 1168. Thus it is possible that he was a local deity, or a local variety of another god (presumably Perun). But on the other hand, the best-known effigy of Svantevit was found in the river Zbruch in Ukraine, obviously far from Arkona. The westernmost Slavdom, being well-described by chroniclers from neighbouring German lands, is also responsible for plenty of other regional deities. If it is not Svantevit, a Slavic god a layman might know of (even if not its link with Slavs) is likely Chernobog, known to have been worshipped in this area. Meanwhile, on the other side of Slavic Europe, deities like Hors or Simargl make an appearance, though they are often considered borrowings from neighbouring Turkic and Iranic peoples.

The Other Wiki has a list of Slavic deities

for your perusal.note Take this page with a grain of salt, as many if not most of the deities listed there are known to be false

, from which some of this article has been cribbed.