Our Mermaids Are Different 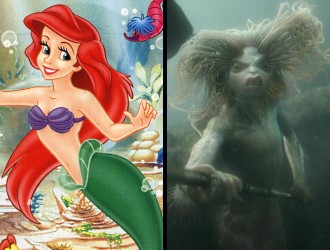 Often very different.
(Left: The Little Mermaid (1989), Right: Harry Potter)
"Mermaid, oh murmur into my ear
The answers to questions I'm longing to hear;
Does it relax you to hearfolde the sound of the land?
Do you, O mermaid, have slightly webbed hands?"
— Flight of the Conchords, "Mermaid"
Advertisement:

Mermaids, or more generally merfolk, crop up quite a lot in fiction. However, like most mythical creatures and monsters, they are a little different every time and have different rules applied to them. Their dispositions, morality, and alliances vary depending on the author, and whether or not they can become human is a question everyone answers differently. Even their general appearance isn't fixed: see the picture.

Appearance: Merfolk are generally portrayed as beautiful women (mermaids) or handsome men (mermen) with fish- or dolphin-like tails in place of legs. Sometimes they have a few fishy characteristics on the human half as well- such as Ear Fins, arm fins or scattered scales- an aquatic Cute Monster Girl. Others are more blatantly sea-creatures with few human characteristics and are quite ugly, for example the Harry Potter merman (mermaid?) pictured. Sometimes they have features reminiscent of other, more exotic sea-creatures, and sometimes they are sea-animals that become human-like under certain circumstances.

Some joke that merfolk must have the fish half on top instead of on the bottom in order to resolve "the Mermaid Problem". Mermaids who are more human-looking (and modest) tend to wear Seashell Bras. And then there's underwater folk like Aquaman, Namor, The Man From Atlantis etc. who look like normal humans for the most part but can survive and breathe underwater and may have some odd physical adaptations that are well-hidden until they return to the sea.

It should also be noted that most mermaids have the "fish half" in a cetacean (horizontal fluke) configuration, rather than a fish's vertical configuration, since this is closer to how an actual human swims, though exceptions exist.

Finally, given that there are more than 15,000 species of fishes in Earth's oceans, the actual kind of fish-tail which even a traditional mermaid might sport provides yet another basis for diversity of appearance among them. Of course, a sizable fraction of mermaid imagery doesn't actually replicate any extant fish, but just starts out with a feminine hip-bulge and tapers the tail down to a big wide fin.

Merperson to Human: Sometimes merpeople can turn into humans, or vice versa, under certain circumstances. The way this is done and differences in the "rules" surrounding this are numerous:

Good or Evil?: Sometimes mermaids are portrayed as evil seductresses (sometimes called devil fish) who lure sailors to their deathsnote this is based on the myths of sirens which were originally birdwomen but who are generally portrayed as mermaids these days due to language confusion. Others, their singing is a sign of disaster, but not from seduction. In most mythologies, they display the inscrutable and sometimes dangerous amorality of The Fair Folk, especially if mermaids are treated as marine fae. Sometimes they are good but flirty and mischievous. Sometimes they are mostly innocent and naive. Sometimes they are honorable, and of these, several resent us for treating their ocean home so badly for so long. Sometimes (just sometimes) they are just like us and have all sorts of personas. Very often, though not always, they are Tsundere, or even outright Yandere types. Octopus or Squid-based mermaids—sometimes called cilophytes or cecaelia—are usually portrayed as evil, probably owing to the influence of Disney's sea-witch Ursula, or perhaps because of the "alien" nature of tentacles.

One thing that also tends to vary among depictions of mermaids is their ability to survive on land: some depictions show them being completely unable to breathe out of water, others show them being able to stay above the surface but needing to be wet to avoid drying out, and some show no qualms at all about leaving the sea and can stay out of water seemingly indefinitely (except for not having legs).

Most merfolk can communicate with fish and sea creatures, regardless of whether they eat them or not. Expect merfolk to remain naked no matter how deep they swim or how little protection their skin has, though their bodies might have some unseen protection against the cold and high pressure of the depths.

Many artists portray merfolk as having human-like knee and ankle joints instead of a spinal column. They'd probably swim much like a human using a monofin, a single large flipper

to use both legs at once. If you watch swimming competitions you do notice that when they are underwater (after kicking off the end) they do keep their legs together and use an undulating motion. A horizontal fluke just extends this motion.

Unscaled Merfolk is a Sub-Trope, where the non-human parts are not a scaled fish, as are Mermaid Problem, Apparently Human Merfolk and Sirens Are Mermaids. See also Selkies and Wereseals.

May occasionally overlap with Fish People, though they are generally more of genetic fusion than a half-and-half put together.

Flapjack and friends learn that when a mermaid's hearts' wishes are used up, they die and are reborn as skymaids.

Flapjack and friends learn that when a mermaid's hearts' wishes are used up, they die and are reborn as skymaids.