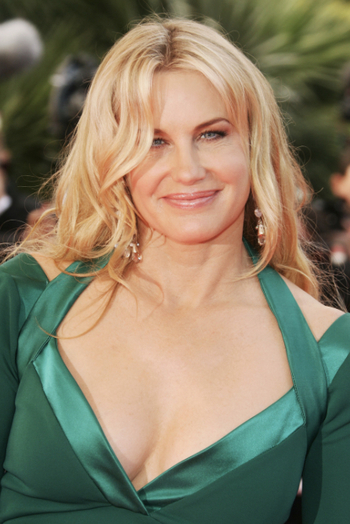 "The famous Hollywood mermaid, half-woman half-kipper."
— The Play What I Wrote
Advertisement:

Her first major role was the Replicant Pris Stratton in Blade Runner before being catapulted to stardom from her role in Splash. She was a popular leading lady through the rest of the 1980s and the early 1990s, having major roles in Legal Eagles, Roxanne, Wall Street, Steel Magnolias, Grumpy Old Men and the 1993 remake of Attack of the 50-Foot Woman.

A 1992 incident in which she was found badly beaten, allegedly at the hands of then-boyfriend Jackson Browne, became a media circus in the tabloids and her career went into a slump afterwards, though not nearly to the same extent that it hurt Browne's. She experienced a resurgence in the early 2000s, culminating in her appearance as Elle Driver in the Tarantino classic Kill Bill.

She retired from Hollywood shortly afterwards to devote her time to environmentalist activism, though she still acts occasionally, such as in the Netflix series Sense8. She made her directorial debut in 2018 with the surrealist Western film Paradox, which stars her husband Neil Young.

Outside of acting, Hannah is a prominent activist for environmentalist causes. She has appeared in many high profile protests against construction projects (most notably the controversial Keystone XL pipeline) which has lead to her being arrested and jailed multiple times.

In 2013, Hannah revealed that she is autistic

. Diagnosed as a child, it's a condition that she did her best to hide during her career. She said her autism is the reason for her well-known reluctance to appear on talk shows and do promotional appearances for her films, conscious of her social awkwardness. The announcement made a splash, as the autistic community has long decried how autistic girls are consistently overlooked to the point that the condition is believed to primarily affect boys, expressing hope that Hannah's revelation could help change that.

Like many autistics, she prefers to live close to the earth, "off the grid" as much as possible, and cherishes her rescued animal companions.

She later came forward as a victim of Harvey Weinstein in 2017, revealing that he sexually harassed her repeatedly during the production of Kill Bill. She later claimed that Weinstein tanked her career in retaliation for refusing his advances and implied that he played a part in her decision to retire.

I Trope, Therefore I Am: