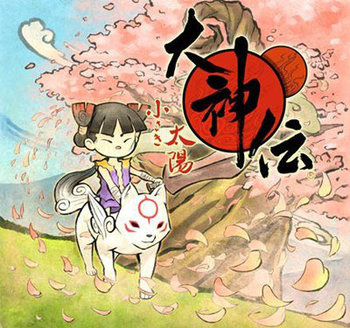 All together now: Awwwwwww!
Advertisement:

Nine months after the events of Ōkami, dark clouds, demons, and cursed zones mysteriously return to the land of Nippon. Issun, trying to perform his duties as a Celestial Envoy, is rescued from the returned imps by a puppy named Chibiterasu, whom he takes to see Sakuya. Chibi has some of Amaterasu's powers, being her son, but he is weaker than the protagonist of the last game, since he's still very young. Chibiterasu teams up with various partners, starting with Kuni (son of the original game's Susano and Kushi) to fight the returned evil.

The theme of returning life to the world also returns, but Ōkamiden is definitely more character-driven than Ōkami and its focus on interweaving the many elements of Japanese Mythology.

The game is on the Nintendo DS. Gameplay is very similar to the original game, with the Celestial Brush adapted to the DS's touchscreen. A new addition is partners, who fight alongside you in battle and can be controlled with the Guidance brush technique.