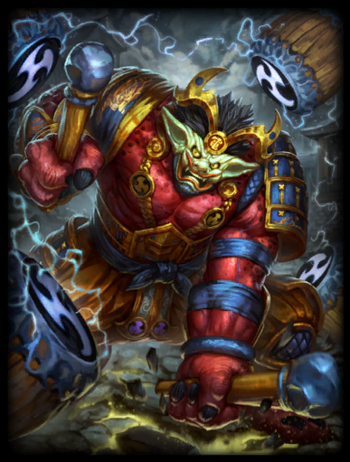 The sound of thunder is loud, powerful, and booming. What common objects can create a similar sound? Certain types of drums. It is thus not surprising that drums tend to be paired with thunder and, by extension, lightning. Sometimes it can be used visually by having lightning striking whenever a drummer plays their drum as if they are summoning it. Sometimes the drums are more directly connected by having them be the cause of lightning.
Advertisement:

Older Than Feudalism. In Chinese Mythology, Leigong ("Thunder Lord") is described as a musclebound deity who creates thunder by hammering his drum as early as 1st century CE. In Japanese Mythology, the thunder god Raijinnote Those familiar with Pokémon may be familiar with the name "Raikou", which is one of Raijin's alternative names. Both Raikou (the god) and Leigong are written in the Chinese script as 雷公. is also commonly depicted with having a ring of drums behind his back.

May overlap with Instrument of Murder if the drummer is summoning lightning to attack their foes. Not to be confused with the dragon species from Dragons: Riders of Berk.