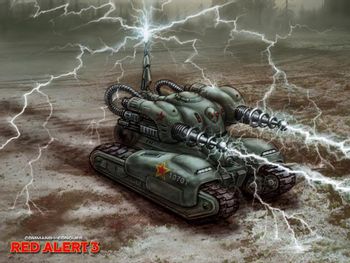 Dirty Communists don't believe in electric bills.
"We've got lightning guns. We can do anything."
— Atomic Robo and the Shadow from Beyond Time
Advertisement:

In Real Life, for electric current to flow there must be a difference in electrical potential. There must be negative and positive termini for current to flow between. Not so in fiction. Quite often, it will be possible for some device or some person to simply fire a lightning bolt more or less straight forward toward another presumably electrically neutral object, with no sign of building up charge separation beforehand. It is rare to see lightning weapons or electricity-based Elemental Powers that have electricity behaving the way it does in Real Life.

When this is an actual gun, it can be regarded as a cooler version of the basic Ray Gun or flamethrower. No matter how outlandish the idea is, adding Nikola Tesla as (the inspiration for) the creator will immediately suspend any disbelief a reader may have.

Science shows like Mythbusters and others have explored the possibility. The general consensus is that it's possible in a couple of ways, but requires so many conditions/complications that the chance of creating a practical one is virtually zero.

Recently there have been a few examples of lightning gun technology deployed in real life, though it obviously doesn't function the same as in fiction.