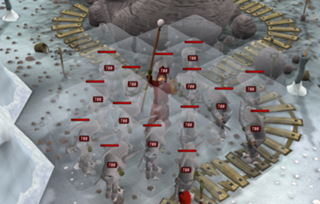 Forget Harmless Freezing.
The Hurricane has quickly gotten a reputation for being a very crowd-pleasing weapon - unless we're talking about the crowd it is being aimed at.
— "Hurricane" Guided Rocket System description, Deep Rock Galactic
Advertisement:

You're an adventurer, and you've joined up with other adventurers to take on a difficult challenge. The thing is, everyone's picked up the habit of standing around in a tight group. You're doing this to make it easier for healers to reach everyone and maybe pick up a Status Buff aura or two. But the enemy has noticed this and decided to do something about it.

A Herd Hitting Attack turns standing in a group from a benefit into a liability, generally useful against Wolfpack Bosses. This could involve:

In every case, spreading everyone out will reduce the potential damage of the attack, but make it harder to cover everyone. Note that not all area of effect attacks are Herd Hitting Attacks: if a point blank (centered on the user) or ground targeted area of effect attack is telegraphed (such as an obvious casting pose or Invocation), it's possible for the entire group to avoid the attack by moving out of the way without spreading out.

Commonly used by MMORPG bosses, though the occasional mook might have one. Also appears in RTS games, possibly as a deterrent to the Zerg Rush. If the attack is the status effect variant and causes the afflicted to explode, it's Why Am I Ticking?.

Kamek's magical attack can strike up to four opponents at once.

Kamek's magical attack can strike up to four opponents at once.