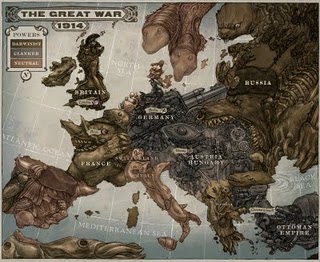 Put down your history books...
"Choose your weapon: Clanker or Beastie"
Advertisement:

Leviathan is a book series (and the first book in the series) by Scott Westerfeld that takes place in an alternate version of World War I Europe. Some of the differences are that Archduke Franz Ferdinand and his wife are assassinated in the evening, as opposed to the afternoon, they have only one son... Oh, and Germans and Austrians use giant Walkers to fight the British and French Fabricated Animals. Obviously, he took liberties with history.

In this version of history, when Charles Darwin came up with the theory of evolution, he also discovered the 'threads of life', or DNA - and, more importantly, how to manipulate them and construct new creatures. Fast forward 50 years, and you find London crawling with fabricated elephants and giant oxen instead of cars, and gecko/parrot hybrids are used to send messages.

The series follows two characters - the Archduke's son, Prince Aleksandar, who is whisked off on the night of his parents' assassination to a secret hideaway in the Alps before his enemies can assassinate him. The second character is a girl, Deryn Sharp, who poses as a boy in order to join the British Air Service and eventually finds herself aboard the Leviathan, a massive Flying Whale Airship that is bound for the Ottoman Empire with one Dr. Nora Barlow, a Boffinnote a scientist, in this case somebody who makes Fabricated Animals and her very secretive cargo. As a war between the fabricated Animal using "Darwinists" (not like that) and Walker-using "Clankers" looms, Alek soon finds himself aboard the Leviathan as his enemies close in.

A second book, Behemoth, was released October 5, 2010. The last book in the trilogy, Goliath, was released on September 20th, 2011. Westerfeld also wrote a bonus "fanfiction" chapter on his blog

and commissioned a new piece of art for Christmas 2011. Finally, a companion book titled The Manual of Aeronautics, featuring full-colour illustrations of the creatures and machines from the series (and several that weren't), was published in 2012.

Not to be confused with Leviathan, the third novel in the Illuminatus! trilogy, nor the magnum opus of Thomas Hobbes. If you are looking for the novel about a British aircraft carrier, this is HMS Leviathan.