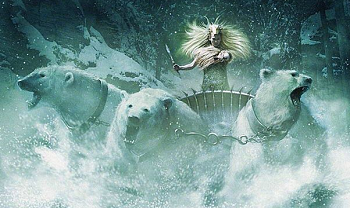 What a cool ride.
This trope is about vehicles that are pulled by cool, fantastic and unusual draught animals.
Advertisement:

Horses or oxen are the most common animals used to pull carts or carriages. In addition to bovine and equine species, reindeer, elephants, camels, llamas, sheep, goats, and dogs have been used as draught animals in real life. In fiction, things can get so much more varied and so much more awesome. A cart, chariot, carriage or sleigh pulled by unusual animals is a sign that the character is a fantastic being from myths, legends, sci-fi, fantasy or fairy-tales.

So if your character drives around in a chariot pulled by predatory animals, it scores some points on the awesomeness scale because only a truly badass character can use animals like cats, lions, panthers, tigers, bears, polar bears or wolves as draught animals. Under normal circumstances, these animals will rip you to flinders if you try to harness them. Therefore anyone who succeeds in making predators substitute for equines must be cool, have magical abilities, be nigh omnipotent or cuckoo. It might also be a sign of highly unconventional thinking.

In Mouse World and similar settings, chariots, carts or sleighs can be pulled by rodents, especially mice, or rabbits or small birds. Those little draught animals give some "cuteness points" to our unconventional travellers and drivers. In the case of tiny animals, characters might need to harness large amounts of them. In fantasy settings, there might appear some vaguely ox-like fantasy creatures and large lizards, and some of them may be Mix-and-Match Critters. Fictional worlds set under the sea or similar underwater settings can feature fish, eels, seahorses or turtles as carriage-pullers. Swans as majestic and elegant birds are a popular choice for gods and goddesses or other powerful characters (see also Swan Boats).

Cats and Panthera Awesome are an extremely popular choice, so much so they form an Internal Subtrope. Mostly because cats are cute, cool, superior and connected to magic. They're domesticated and therefore very familiar, but they're still somewhat wild and untamed, mysterious and unpredictable. They're notoriously disobedient and known to do only what pleases them. Whoever manages to harness them and get them to cooperate must be awesome and powerful, and immediately gains the symbolism connected to cats or big cats.

This trope is usually seen in myths, fairy-tales or fantasy. These vehicles and animals will signify prestige transportation in areas where other mechanical transport is cheap and easy. Occasionally it is employed for comedy when a Cloudcuckoolander or somebody truly insane attempts to pull this in a fictional work that is fairly realistic.

Sister trope to a Horse of a Different Color which is for animals that can be mounted as a horse, and close to a Dragon Rider. The power relationship is however different: a mount has a close, special bond with its rider, based on trust and mutual respect, while carriage-pullers are more like servants or even slaves, with the carriage-driver acting like their master who dominates them.

May overlap with Fantastic Fauna Counterpart, if the draught animal is treated as the setting's equivalent of oxen.

The trains in the Nyakuza Metro level are all pulled by gigantic cats. They also serve as a stage hazard that Hat Kid must avoid.

The trains in the Nyakuza Metro level are all pulled by gigantic cats. They also serve as a stage hazard that Hat Kid must avoid.