Western Animation / The Nightmare Before Christmas 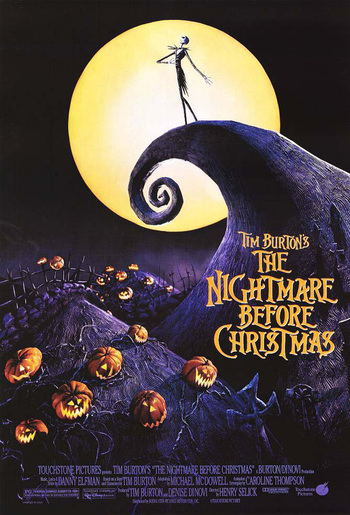 "Yet year after year, it's the same routine
And I grow so weary of the sound of screams
And I, Jack, the Pumpkin King
Have grown so tired of the same old thing..."
Boys and girls of every age
Wouldn't you like to see something strange?
Come with us and you will see
This, our town of Halloween!
— "This is Halloween"

Released to cinemas on October 29, 1993, The Nightmare Before Christmas is a Stop Motion animation film produced and conceived by Tim Burton, though actually scripted by Caroline Thompson and directed by Henry Selick (as Burton himself was very busy at the time, shooting Batman Returns and overseeing pre-production for Ed Wood). It starts with the grisly yet kind-mannered citizens of Halloween Town celebrating (you guessed it) Halloween in the grandest fashion possible, due to their love of (all right, unnerving obsession with) scaring everyone senseless. However, Jack Skellington, the Pumpkin King and the town’s ruler, has grown rather tired of the same old thing, and yearns for something new in his life.

After the current year's celebration of Halloween, the morose Jack goes for a long walk out of town into the forest, where he happens to walk into a circle of trees he's never seen before. Each tree bears a portal which leads to another holiday town. Immediately attracted by the Christmas tree shaped one, he ventures into Christmas Town. There he discovers the wonders of the bright and jolly, and becomes obsessed with understanding Christmas.

He returns to Halloween Town and informs the townsfolk of Christmas, but both his and their understanding of the holiday is limited by their experience of Halloween. In a Perspective Flip of the typical Christmas Special plot of "monsters try to steal Christmas," Jack has perfectly good intentions — he thinks taking over Christmas for a year will be great fun for everyone involved, both in Halloween Town and the human world, and it'll give "Sandy Claws" a year off for vacation once some homicidal children kidnap him and bring him to Halloween Town to sit Christmas out.

The whole town groups together to create Christmas, but Sally the rag doll, who is secretly in love with Jack, has a vision that it will be a disaster. She's right, of course.

Throw all that in with a boogeyman fashioned from a burlap sack filled with insects, rousing musical numbers so catchy they're scary, scares a-plenty for the young ones, and some truly brilliant imagery and directing, and you get the now widely beloved holiday classic The Nightmare Before Christmas.

From 2006 to 2009, the film received a theatrical re-release once a year at Halloween time, with a somewhat disappointingly light-handed makeover into a 3-D movie. Compare Coraline, which is from the same director. The difference likely has to do with the fact that Coraline was intended to be a 3-D film from the time it began filming, and it was specifically shot for that purpose during filming. The 3-D version of The Nightmare Before Christmas was retrofitted approximately thirteen years after its original release. The film also sees frequent TV airings around both the holidays of Halloween and Christmas.

Burton would later conceive (and direct this time around) another animated film in the same vein, Corpse Bride.

The Film provides examples of:

Dr. Finkelstein from The Nightmare Before Christmas, Halloweentown's resident scientist and creator of Frankenstein's Monster-inspired Sally.

Dr. Finkelstein from The Nightmare Before Christmas, Halloweentown's resident scientist and creator of Frankenstein's Monster-inspired Sally.