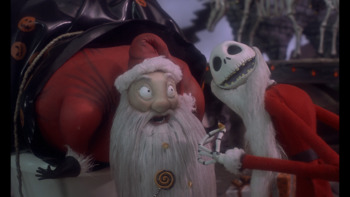 What better place to take a Holiday from a Holiday than in a kidnapper's sack?
I wanna be Santa Claus
So I'm gonna kill Santa Claus
When I hear those reindeer pause
I'm gonna break the law
This Christmas, don't got a wishlist, I got a hit list
And at the top of it is old Saint Nicholas
Nothing against him, it's just business
I ain't the Grinch, but I'm gonna steal Christmas!
— Danny Gonzalez, "I'm Gonna Kill Santa Claus

Holidays like Christmas usually have a beloved and well known central figure associated with them. Santa Claus is perhaps the most well known, and he and the others are usually said to have magical powers that let them spread their holiday cheer around the world. The kids love them too, which is a bonus.

Therefore, in works based around these holidays, you'll often find villains who envy these holiday mascots and want their power for themselves.

This trope isn't about characters simply pretending to be Santa or any other holiday figure, this is about them performing a coup and gaining their power.

See also How the Character Stole Christmas and Bad Santa. Compare Subbing for Santa when the character is acting as Santa's substitute as a means of helping his job, not to overtake him. Subtrope of The Usurper.