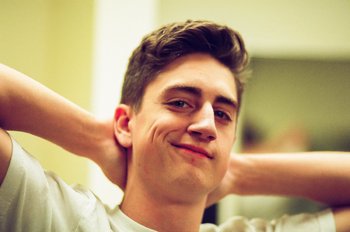 Danny Gonzalez (born June 12, 1994) is a comedy Viner who later moved to YouTube, where he began to focus on commentary, parody, and even song-writing.

On Vine, his videos consisted of a wide range of parody jokes, including meta humor, visual puns, and character-based gags. His videos on YouTube mostly revolve around commentary, and he talks about everything from weird internet content, to strange advertisements, to funny mockbuster movies. They're also highly edited in a lot of aspects, adding visual distortion, text, and other editing tricks to add a dose of Surreal Humor to his videos, and incorporate his comedy from Vine as well.

Another thing he does frequently is create parody songs about something he's discussing, be it joking about The Santa Clause or creating his own version of Justin Bieber's "Yummy".

Check out the channel here

, where he likes to be a little goofier and drink La Croix.

This work page is over now, go find something else to read, I know we've had a lot of fun, but you can't stay on this stinger forever...