Film / How to Build a Better Boy 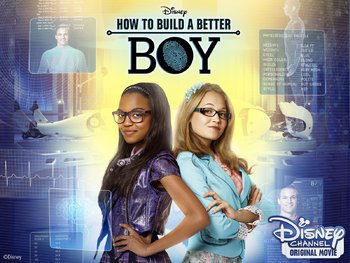 How To Build A Better Boy is a 2014 Disney Channel Original Movie.

The film is about 2 tenth grade girls Mae Hartley (China Anne McClain) and Gabby Harrison (Kelli Berglund) who create a virtual perfect boyfriend they name Albert (Marshall Williams). Unknown to them is that Albert is actually a prototype robot soldier called the X-17. He is programmed with a mission to be Mae’s perfect boyfriend and take her to homecoming. After arriving at their school, he becomes Mae’s boyfriend leading to a rift between her and Gabby. Meanwhile both Federal agents and black market spies are trying to retrieve Albert for their own ends. Mae and Gabby, along with Mae’s brother Bart (Matt Shively), learn Albert is actually a robot. At the homecoming dance, Albert convinces Mae to have him self-destruct since the government will never stop getting him back. After doing so, Mae and Gabby reconcile and Gabby starts dating Bart.

The movie also features Noah Centineo as Jaden, a jock Mae has a crush on, and Ashley Argot as Nevaeh, the head cheerleader who is currently dating Jaden and is a bully to Mae and Gabby, but especially Mae.