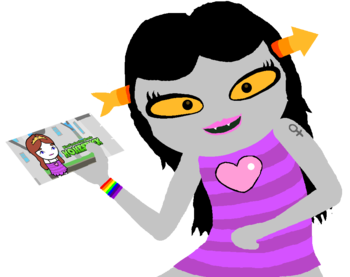 is a transgender liveblogger that mostly functions out of Tumblr. She began liveblogging April 18th, 2018. She's known for session frequency, her organization, and her wacky photoshop edits. She also has a heavy focus on audience participation, often posting long Discord conversations during a session. She's one of the few livebloggers that have completed Homestuck.
Advertisement:

She also does what she calls "Casual Liveblogs" where she liveblogs whatever she happens to be watching at the time. Some of the liveblogs featured there include select episodes of My Little Pony: Friendship is Magic, random zero view youtube videos chosen from an algorithm, and even liveblogs of other liveblogs.

where she uploads her reaction videos and sketch compilations.

Her Screener is the endlessly helpful Wakraya who's constantly featured on the blog itself.

She started online dating a woman screennamed Ydah as of March of 2019. Their romantic escapades were quite public at the start, but they've since taken their affairs to private chatrooms.