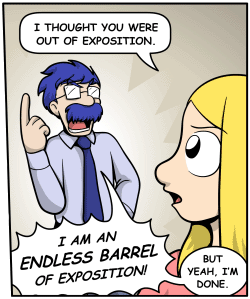 See also Captain Obvious, Expositron 9000, Haunted House Historian, and Exposition Fairy. The Combat Commentator is a variation that provides color commentary for ongoing fights. Not to be confused with Mr./Ms. Fanservice, though the comparison could make for some interesting puns.