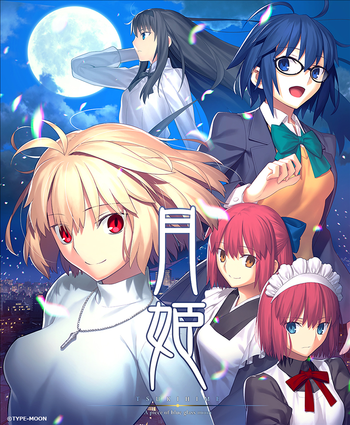 Blue Blue Glass Moon
Under the Crimson Air
"I'll show you. This is what it means to kill something."
Advertisement:

After being involved in a major accident, the young heir of an affluent family named Shiki Tohno awakens in a hospital to find parts of his memory are missing and he can see glowing, pulsing red lines covering everything in his sight, from inanimate objects such as his bed to the living doctors and nurses treating him. Furthermore, he discovers that by tracing something along these lines, whatever they're on will fall apart with frightening ease. Growing increasingly unstable staring at a world that could literally fall to pieces with a mere touch, Shiki attempts to escape the hospital, only to come face to face with a self-styled "Sorceress", who teaches Shiki about his condition, tries to instill in him the beauty and value of life, and as a parting gift gives him a special pair of glasses that hide the lines from what the Sorceress calls his "Mystic Eyes of Death Perception". Finally able to somewhat recover, Shiki is soon sent away to live with a branch family of the Tohnos, while his sister is made the new heir in his place.

Years later, Shiki is now a high-school student and living a normal life — that is, until he receives some devastating news: his father has died, and he must return to the main Tohno household at once. As Shiki settles into his new home and altered school life, and attempts to reconnect with his estranged family, he happens to cross paths with a strange blonde-haired girl with piercing red eyes on the street. Seized by an overwhelming, unknown desire, Shiki follows her into an alley, and by the time he has regained his senses finds he has cut her into 17 distinct pieces for no apparent reason before passing out in shock... only to then wake up in his bed at home. Was he dreaming? What force could possibly compel him to commit such a horrifying act? Is this somehow linked to his Mystic Eyes of Death Perception, or his family's rumored occult past? And... hang on, did that red-eyed girl just show up again claiming he murdered her? Despite looking no worse for wear? And... does she have a crush on Shiki?!

Tsukihime (lit. "Moon Princess") is the story that put Type-Moon and Kinoko Nasu on the map. One of the nascent company's first major projects (on initial release, it was still a doujin circle, not a company) and the original release debuted at Comiket in 2000. It set the foundations for Type-Moon's budding universe and helped lead to the massive franchise juggernaut we know today. The Visual Novel contains five major story routes, each associated with one of the female leads. The routes are subdivided into two branches, Near and Far Side of the Moon: the Near Side routes (The red-eyed girl, Arcueid, and Shiki's classmate Ciel) revolve around power struggles between various Nasuverse vampires and spend a lot of time on Worldbuilding; the Far Side routes (Shiki's sister Akiha, and the Tohno house's maids, Hisui and Kohaku), by contrast, are much more introverted and personal, focusing more on the dark secrets of the Tohno family. Each route except Kohaku's has two endings — usually labeled True and Good (except one, who only gets True and Normal) — and a secret epilogue, "Eclipse", is unlocked by clearing all nine endings.

. Also has a manga adaptation and an anime adaptation both released under the name Shingetsutan Tsukihime (lit. "Lunar Legend Moon Princess"), a pseudo-sequel game of short stories, Kagetsu Tohya (lit. "Ten Nights of the Poetic Moon"), and a series of sequel fighting games, Melty Blood, that take place after a Third-Option Adaptation version of the original story's various endings.

A remake of Arcueid and Ciel's Near Side routes (now called Moon Princess and Rainbow of the Night respectively), titled Tsukihime -A piece of blue glass moon-, was released on August 26th, 2021 for Nintendo Switch and the PlayStation 4. The remake features all new art, full voice acting, updates the time period from the 1990s to the 2010s, shifts to a more metropolitan setting, and expands both routes' stories, including adding a variety of new characters in both familar and all new roles. The Far Side routes (including a long-rumored route for the secondary character Satsuki "Sacchin" Yumizuka) are planned for later release as Tsukihime -The other side of red garden-.

A number of official manga anthologies for A piece of blue glass moon have been released.

Takes place in the Nasuverse. Compare to The Garden of Sinners, Nasu's earlier novel series that Tsukihime recycles a lot of concepts from (including a Knife Nut protagonist named Shiki and the Mystic Eyes of Death Perception). See also Mahou Tsukai no Yoru, which serves as a prequel to Tsukihime and The Garden of Sinners, featuring a younger version of Shiki's Sorceress teacher, Aoko Aozaki, as the main character.

open/close all folders
In General
Original continuity
Tropes pertaining to the continuity derived from the original 2000 Visual Novel.

Works in this Continuity: the 2021 visual novel Tsukihime -A piece of blue glass moon-, Melty Blood: Type Lumina, the yet-to-be released Tsukihime -The other side of red garden- visual novel.
Unsorted