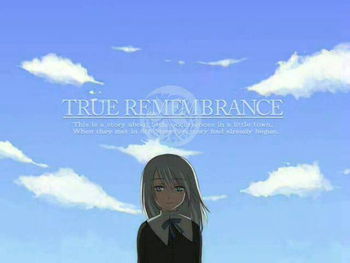 This is a story about little occurences in a little town. When they met in 8th Street, a story had already begun.
Advertisement:

A humble Visual Novel first released in 2003 by Satomi Shiba. It was subsequently given an Updated Re-release, and the online visual novel localization group Insani created an English version in 2008. This adaptation was done with continuous help and input from the creator, making it unusual even by Insani's standards of creator-sanctioned works. The Insani adaptation can be found here

, and is very highly recommended.

The story of True Remembrance is deceptively simple: 20 Minutes into the Future, the world has fallen to a pandemic of super-depression known as the Dolor, which eats away the affected's mind in a process called Psyche Corrosion, eventually leading to suicide. The only known cure is difficult and scarce; the only way to cure situational depression, after all, is to help those who suffer it past the memories causing it, or to destroy those memories completely. The government has decided that the latter option is faster, and cultivated a group of people called Mnemonicides ("memory killers") who can induce amnesia in their patients through a long treatment process, thus removing the Dolor and ending the Psyche Corrosion.

Mnemonicides are scarce, and they work in one sleepy, snowy town, where their patients ("Guests") are sent. The waiting list to get into this town is long, but the town itself is so cut off from the outside world that all that seems to matter is what happens inside it.

True Remembrance is the everyday yet remarkable story of a Mnemonicide named Blackiris and his Guest, an extraordinary young girl named La.

It also has an eShop release

for the Nintendo 3DS, but currently only in Japan.