Manga / The Unforgiving Flowers Blossom in the Dead of Night 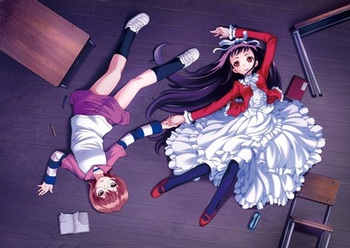 "Please listen to the story of my pitiful self."
Advertisement:

Marie Moriya is a rather timid girl, who is frequently bullied by her classmates. On top of that, Kanamori, her homeroom teacher who initially defended Marie, has begun to molest her at night in the Old School Building. When some of the other students start talking about the ghost story of a girl (herself) crying in the toilets at night and killing those who talk to her, Marie desperately wishes this to become reality in order to take her revenge on everyone who makes her life a living hell, starting with her teacher. Just as she is thinking that, a strange girl appears before her and offers to make her the 8th mystery of the school. She is the doll of the infirmary, the Dancing Higanbana. Marie's wish is about to come true…

However, poor Marie soon finds herself in the middle of a power struggle between the school’s Youkai. Can she quell them all, and deal with the rampant bullying in her school?

The Unforgiving Flowers Blossom in the Dead of Night (JP: Higanbana no Saku Yoru ninote lit. "On the Night the Red Spider Lily Blooms", though it can be also read as "Higanbana: When They Bloom") is a horror manga series, created by the creator of the When They Cry series, Ryukishi07, and drawn by Ichirō Tsunohazu (the actual character designs are by Nishieda, though), that started in 2010. It is published in Monthly Dragon Age magazine by Fujimi Shobo, a division of Kadokawa Shoten, who also published the manga adaptation of Higurashi: When They Cry.

Ryukishi07 has adapted the manga as a two-part Visual Novel series, with each game being released on August 13 and December 31 of 2011, respectively. Unlike When They Cry, each game is a Genre Anthology and contains up to seven self-contained short stories. Each of these stories follows a different protagonist, though the benevolent youkai Marie and her not so benevolent friend Higanbana always have some role in them. The stories are sometimes dark and cruel but sometimes simply bittersweet.

Alternative Title(s): Higanbana No Saku Yoru Ni, The Unforgiving Flowers Blossom In The Dead Of Night