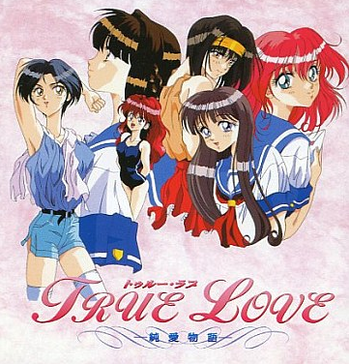 True Love ~Jun'ai Monogatari~ (TRUE LOVE ～純愛物語～?), better known simply as True Love, is a Japanese erotic Visual Novel developed by Software House Parsley and published by CD Bros., released on June 9, 1995 for the PC-98 and on December 6, 1996 for Windows. It was localized in Europe by Otaku Publishing and distributed in North America by JAST USA in January 1999. Unlike traditional, even modern visual novels, which are characteristically uninvolved beyond the periodic decision to make, True Love incorporates the stat-raising elements of a Raising Sim (which, as the genre was fairly unknown in the West at that time, led it to sometimes be described as an RPG).

The Player Character (default name: Daisuke) is a highschool (or "college" in the localization) senior from the fictional town of Meiai. His Amazingly Embarrassing Parents (and specially his Dirty Old Man dad) want him badly to have a girlfriend, so they've made him live in a flat under the idea that being an independent man will help him attract romantic partners. Also, the MC is plagued by doubts about his academics, as he's Book Dumb but also kinda aware that he could do better...