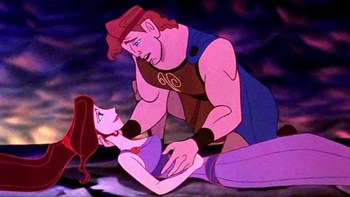 "People always do crazy things...when they're in love."
"Oh, and stay away from your friend, the Captain. You save his life, he saves yours, this leads to that..."
— Dr. Sid, Final Fantasy: The Spirits Within

One of the methods writers use to jumpstart relationships. A variety of Samaritan Relationship Starter.

Alice is in a fix. She has tried everything. She doesn't know what to do. When all hope seems lost, Bob comes in at the last minute and rescues Alice, causing Alice to fall in love with him.

If done humorously, this is done at the beginning of a series, adding to the Harem. A staged rescue is a common simple plan to get a couple together.

Done seriously, this is one of the ways writers get a relationship hampered by Cannot Spit It Out started, as opposed to communication, or heck; they might not have even met or talked to each other previously.

A typical set up goes something like this (adjust the details to fit your setting): An agile male character, often the Hero, meeting a female character (Love Interests, etc) by saving them from being hit on by thugs, or older (college) men who seem lecherous. The thugs grab the female by the hand and pull her away to have a "cup of tea" with them, or become violent as she stubbornly rejects their advances (may involve knives). Enter the hero, either hitting the offenders in the arm, or entering the scene by kicking the guy (head, solar plexus, etc), and saving her from forceful romantic advances. (And possibly incurring some injuries, enabling the After Action Patch Up.)

Oddly enough some medieval romancers, despite being the reason Damsel in Distress is called that ("damsel" being the diminutive of medieval French for "lady"), actually sometimes didn't like this trope. Basically some of them thought that, since the girl now owed the guy, the resulting romance wasn't pure enough, aesthetically speaking. The various aristocrats who paid their bills mostly told 'em to shut up; part of the ideal of knighthood was being a protector, and who doesn't want to hear about a good deed they could actually do being rewarded with some sweet lovin'?

Expect a negative response from some if this chickifies an Action Girl (though this can be almost completely negated by having the couple take turns with the Distress Ball). Nevertheless, the Knight in Shining Armor saving the Damsel in Distress who he then weds and the two living Happily Ever After is at least Older Than Feudalism, going back at least as far as the myth of Perseus and Andromeda.