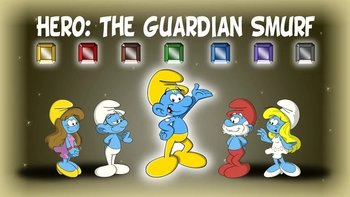 Hero: The Guardian Smurf is a fanfiction series created by Fandom user A Heroic Smurf, which appears on the Smurfs Fanon Wiki. The list of his work, both completed and future projects, is shown here

In the series, a young Smurf named Hero found seven Power Stones, which together gave him great Ki abilities. Unfortunately, as a Smurfling, Hero was not able to control these powers and had nearly killed a Smurf due to that loss of control. Exiled from the village for 100 years in order to gain better control over these new powers, Hero returns at the time when the Smurfs first meet Gargamel in the forest and rejoins them as one of their members.

The author is also working on a spinoff series called The Other World, recounting stories of the time when Hero was in exile from the Smurf Village.

This series provides the following examples of: