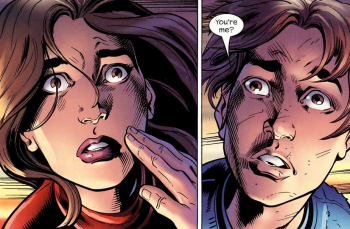 "I'M TOO YOUNG AND TOO MALE TO BE THE MOTHER OF A SEVENTEEN YEAR-OLD FEMALE ME!"
— Elliot, El Goonish Shive
Advertisement:

While clones and most other sorts of sci-fi duplicates are identical to the original character and, by definition, the same sex, exceptions do exist. The idea dates at least from Nine Lives by Ursula K. Le Guin (1969), where recognized geniuses are routinely cloned in large mixed-sex groups and Time Enough for Love by Robert Heinlein (1973), where the opposite sex clones become sexual partners of the original. Nowadays the trope is more often used as a quick way of producing a Distaff Counterpart rather than for titillation. Merely being of the opposite sex of his or her original greatly increases the chance of the clone surviving the denouement and showing up in a future story. This way writers can invoke the First Law of Gender-Bending without sacrificing an original-sex character they've grown fond of.

Biologically, this is somewhat plausible for male-to-female cloning, because a male has an X-chromosome that can be doubled to produce a female clone, as in Garrett's poem and Heinlein's novel.note Strictly speaking, you don't even need the second X chromosome, though omitting it is a good way to kill 99% of your fetuses and give the surviving 1% Turner syndrome.

Alternatively, the SRY gene, which causes maleness, can be removed from the Y chromosome. For female-to-male cloning, the Y chromosome would have to come from another subject, preferably a paternal relative and most ideally the father, as if the original subject were a male, she would have had a Y chromosome virtually identical to her father's. Nevertheless, this would technically not be a pure clone. A Y chromosome could be formed from one of the X-chromosomes, which would require absurd amounts of genetic engineering and amount to simple fiat anyway. Alternatively, the SRY gene can be implanted in one of the X chromosomes

to create a sterile clone that appears male. Somewhat fittingly when given the above, the majority of these characters are female.

If the Opposite-Sex Clone retains the memories and personality of the original this is effectively a Gender Bender, at least from the perspective of the clone.