Recap / Star Trek: The Next Generation S2E1 "The Child" 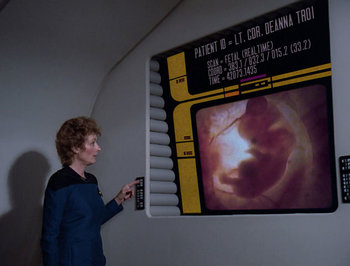 "It appears Counselor Troi is experiencing something known as a mystical pregnancy."
Advertisement:

The Enterprise is on its way to pick up some virulent specimens of various pathogens, for which the newly-minted Chief Engineer Geordi La Forge has designed a biohazard containment module. Dr. Crusher has left for a post with Starfleet Medical, and the new Chief Medical Officer, Katherine Pulaski, has failed to report to Captain Picard on schedule, opting to visit with Counselor Deanna Troi in the ship's lounge, Ten-Forward, instead. Picard is preparing to chew Pulaski out for this when Troi makes a startling announcement: she is pregnant.

The senior officers gather to discuss the development. Riker is both surprised and annoyed, and says, "I don't want to sound indelicate, but who's the father?" It turns out something that Deanna can only describe as a "presence" entered her body and took up residence in her womb. It's the fastest progressing pregnancy Dr. Pulaski has ever seen; the fetus is apparently twelve weeks along after eleven hours. Worf thinks whatever's growing inside Counselor Troi is probably a threat to the ship and suggests abortion, while Data thinks they should study it. The Counselor shuts them all up with, "Do what you have to in order to protect the ship, but know this. I'm going to have this baby."

Before the Enterprise commences loading its extremely dangerous cargo, Dr. Pulaski and Data catalog the specimens together. Pulaski calls Data "Dah-tuh" and Data informs her his name is pronounced "Day-tuh". When she asks what the difference is, he replies that one is his name, the other is not. Pulaski also remarks that the pathogens are a result of some "eager beaver at play." Data doesn't understand, so Pulaski explains that some scientist used genetic engineering just to see how bad bad could get. They inform the Captain that if the most innocuous of the pathogens gets loose, it'll destroy all life on the Enterprise in a matter of hours.

Meanwhile Troi has her baby that same day, and reports no pain during delivery. It's a boy! He is named Ian, after Troi's father. Picard decides to visit the child at Troi's quarters a while later and the boy has the appearance of a toddler. He tells the astonished Captain, "Don't worry, everything will be alright."

Later, Ian has the appearance of a preteen, and when Picard asks him why he's there, he responds that it's dinnertime. Picard says, "No, why are you on this ship?" and Ian responds that he's not ready to reveal that yet.

La Forge starts noticing that some of the pathogens are starting to multiply for some reason, which they should not be. If they continue to multiply, they will burst through containment.

Ian tells Troi that he has to leave now, or it will be very bad for everyone. He then gets really sick and dies. Troi is saddened, but after Ian passes away, the body disappears and a sparkly ball of light floats up and settles in Deanna's cupped hands. She says he was curious about them and wanted to learn more about them. It turns out the entity was giving off some energy that was encouraging the pathogens to grow, and that he left in order to save them.