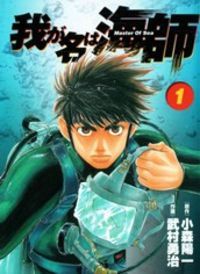 Salvors are men responsible for towing wrecked ships and handling the cargo. They are different from rescue teams as they usually ask for money before offering help. Nanba Rintarou's father was the owner of such a company, but Rintarou really hated the way they operated and decided to join the Coast Guard.

However, Rintarou's father died right after Rintarou completed his training. In his will he asked Rintarou to take over his company. What's worse is he left his son a debt of 1.5 billion yen...

A seinen manga about the rarely-explored world of modern marine salvage, the ups and downs, the long periods of waiting and the brief flashes of action. The authors did a lot of research for this manga, and it shows. Written by the team of Yoichi Komori and Yuji Takemura, this series ran from 2004-2007 in Big Comic Spirits and was compiled into 15 volumes.