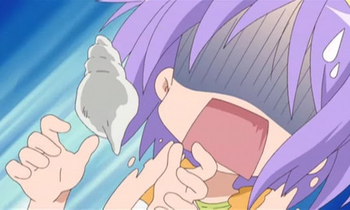 You'd freak out too if you saw a creepy-crawlie come out of the shell you just heard the beautiful sound of the ocean in...
Advertisement:

A character undergoing emotional stress may be shown from a head-on view or directly from the side with their head bowed and their eyes covered by their bangs or forelocks. (Sometimes the shot starts from one angle and cuts midway to the other.) Even if they have no bangs at all, it's their brow ridge that covers them. Their eyes are not drawn, even when they should be at least partially visible through the shadow, giving the impression of a blank face above the bridge of the nose. This usually symbolizes a person driven by events to a point of unpredictable action; when you see this on any cuties, you know they've been thoroughly broken.

This could also be used to show how remorseless and intimidating a monster is, particularly when it is attacking some poor, innocent creatures.

If not temporary and the character's eyes are hidden all of the time, it's Eyes Out of Sight. Eye-Obscuring Hat is for when hats obscure the eyes. One-Way Visor is for it's due to helmets or visors; eye-obscuring hoods go under In the Hood; and when it's caused by glasses, it's Opaque Nerd Glasses. Only emotional moments qualify for Hidden Eyes.

See also The Faceless, Face Framed in Shadow, and Kubrick Stare. Sometimes, the eyes are hidden behind a pair of Scary Shiny Glasses. It's possible to hide them just enough to appear to have Black Eyes of Evil or a Ghostly Gape. When the eyes are hidden because of exposed or hidden character, see Blank Face of Shame. For characters that literally and permanently lack eyes, see Eyeless Face. See also Peek-a-Bangs and Comical Angry Face.