Anime / I'm Gonna Be an Angel! 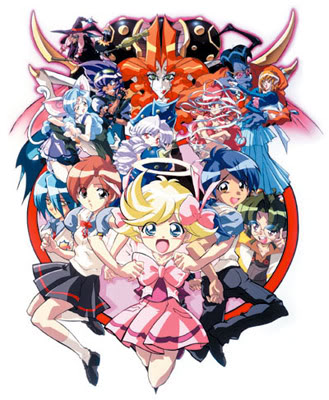 I'm Gonna Be an Angel! (Tenshi ni Narumon!) is a story of a girl who wishes to become an angel for her loved one — to put it simply. But although this premise might sound silly and cheesy, it's a lot more complicated and serious than it may appear at first glance.

The whole story starts with a boy named Yuusuke who just recently moved in to a new house with his father, but because his parents are divorced and his father is mostly busy with his work Yuusuke may as well live alone.

One day on his way to school, he decides to take a shortcut through a forest and there, to his utter shock, stumbles across a naked girl and accidentally kisses her. He then rushes to school where he's greeted with the very girl he met in the forest (fully clothed now!). Her name is Noelle. She follows him back home where Yuusuke finds that Noelle's family (who resemble The Addams Family on crack) has just moved from the Monster World to live in the Human World — and turned his house into something akin to a plastic castle from Toys"R"Us. And all of this because Noelle decided that Yuusuke is her husband, so they are like a family now and should live together.

Yuusuke is not amused. He is already in love with his classmate Natsumi, who unfortunately thinks of him as nothing more than a pervert. When he tears his love-letter (stating that for Yuusuke, Natsumi is like an angel), Noelle, who was listening to the whole conversation, decides that she will become an angel for Yuusuke.

And that is how the whole mess starts. All along, the villains Dispel and Silky will appear, who will try to prevent Noelle from becoming an angel. Noelle will also have a kind of a mentor figure named Mikael, who will encourage her on her path to angelhood.

The anime was produced by Studio Pierrot and aired in Japan in 1999 with total of 26 episodes. There is also 2-volume manga which loosely follows the anime plot.