Anime / I My Me! Strawberry Eggs 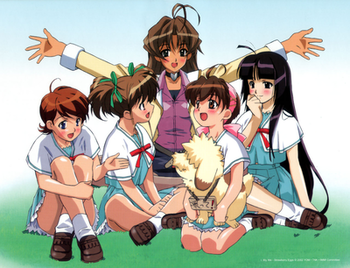 The really weirdly named story of a gym teacher who has to crossdress to get a job.

I My Me! Strawberry Eggs is a thirteen-episode Anime series created by TNK and Pioneer, written by Yasuko Kobayashi, and initially ran on Japanese TV in 2001. There is also a manga adaptation.

The series follows Hibiki Amawa, an idealistic young man who has recently graduated from college with a degree in physical education. Unfortunately, he hasn't been able to find an opening in his field, and is behind on his rent so far that his landlady Lulu holds his dog hostage. At last Hibiki finds an advertisement for a position at Seito Sannomiya Private School. But when he applies, Hibiki is turned down flat. While the school itself is co-educational, the principal refuses to hire male teachers.

Upon learning the situation, Lulu offers to help Hibiki out by disguising him as a woman. (Turns out that the landlady has a suspiciously field-ready assortment of gadgets for just such a purpose.) Sure enough, with this and some slightly altered paperwork, Hibiki is able to start work at the school.

Naturally, things don't go smoothly. Not only does Hibiki have to conceal his true gender from everyone at the school, but the misandrist attitude of the school administration is causing discipline problems with the male students and friction between the boys and girls. And when one of Hibiki's students, the Moe Fuko Kuzuha, starts getting a crush on "her", well…

But it isn't all bad news. Hibiki manages to connect with the students and mediate between them with some success, and even get the administration to ease off on some of their more blatantly stupid rules. In the end, though, the masquerade is revealed, and everything changes.