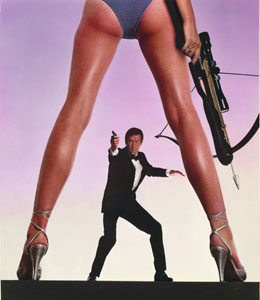 A standard shot where someone or something is framed between the legs of another person. Widely used for movie posters

The most famous example is probably the poster for the James Bond film For Your Eyes Only and subsequent parodies thereof. The poster designer for this film decided to put the one-piece swimsuit of the woman on back to front, exposing quite a bit more of her rear. This attracted quite a degree of controversy and in several locales shorts were painted on. The second most common takes after the shot in The Graduate and the famous line "Mrs. Robinson — you're trying to seduce me... Aren't you?"

Sometimes this is used to introduce the hero of the story ready to take on his nemesis, or the nemesis that the hero must eventually face, without showing who that person is. The legs of that person could belong to a literally "bigger bad".

In fight scenes the shot is often followed by a Groin Attack. In Westerns, this is usually the harbinger of the Showdown at High Noon.

Referred to as "The A Frame" in this article.

Lots of posters can be seen here.