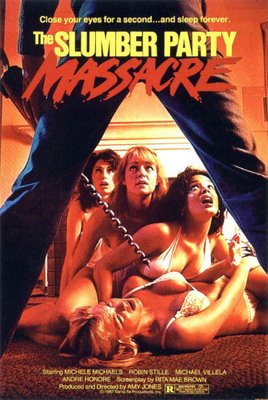 This started out so fun...
Close your eyes for a second... and sleep forever.
— Tagline
Advertisement:

A Slasher Movie from the year 1982, which was originally scripted by feminist writer Rita Mae Brown and directed by Amy Holden Jones (who wrote the first Beethoven film).

A bunch of girls decide to have a Slumber Party with all that comes with the territory; skimpy clothing, booze, pot and perverted guys crashing it. Unfortunately, a maniac has escaped from a mental institute, and seeks to continue the deadly work that he started over a decade ago by carving them up with a power drill...

The trilogy also had several pseudo-sequels/spin-offs, such as Sorority House Massacre, Cheerleader Massacre, and Hard to Die.

This massacred party has examples of: