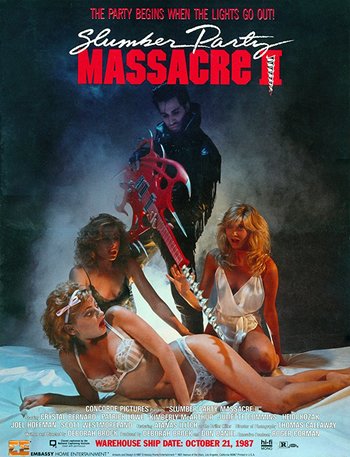 "The party begins when the lights go out!"
— Tagline
Advertisement:

The film follows Courtney Bates, who was one of the survivors of the previous film. She is now a member in an all-girl rock group, who decide to take the weekend off by having a Slumber Party in an estate belonging to the rich father of one of them.

Courtney also suffers from nightmares and hallucinations of a leather-clad rockabilly who is armed with an electric guitar with a built-in power-drill. Despite the visions of her sister trying to warn her about the guy, the rockabilly eventually steps into the real world and starts killing everyone.