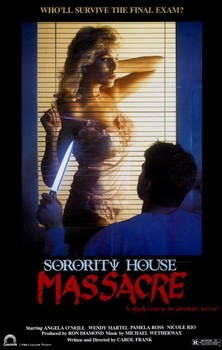 Sorority House Massacre is a 1986 American Slasher Movie written and directed by Carol Frank and co-produced by Roger Corman. The film focuses on a group of sorority girls who stay at their host house over the Memorial Day weekend hoping to have a good time with their boyfriends. Meanwhile, a serial killer who murdered most of his family over a decade earlier has escaped from a nearby mental hospital after developing a seemingly inexplicable psychic connection with one of the sorority girls.