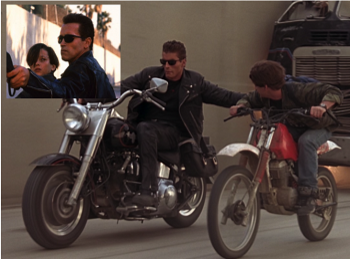 It seems the T-1000 wasn't the only person with Voluntary Shapeshifting in the movie.
"Khan and Kirk battle heroically, while meanwhile in an identical room, two men dressed the same also have a fight. Problem with forty years of television enhancement: What you could get away with on a small grainy screen becomes rather obvious on a large digital one, especially when presented in loving 1080p."
— SF Debris' review of Star Trek episode "Space Seed"

Alice is a famous actress working on her latest movie. The time has come to film the scene where she rides a motorcycle through flaming hoops over a shark tank. But, wait, Alice is far too delicate, precious and non-expendable to put be put through that! A Stunt Double is needed. But Alice's usual stunt double is in the hospital, so what do they do? Hire Alice's friend Bob. Sure, he looks nothing like her, but it's not like anyone will notice.

A subtrope of Paper-Thin Disguise or Special Effects Failure, depending on whether the example is in-universe or not. It often overlaps with Fight Scene Failure. Stock Footage Failure is also related. The Other Darrin is something similar, where a character gets a new actor because the previous one left the show. Happens less often now than it used to, thanks to film and TV-makers now being able to digitally stick the real actor's face on the stunt performer.