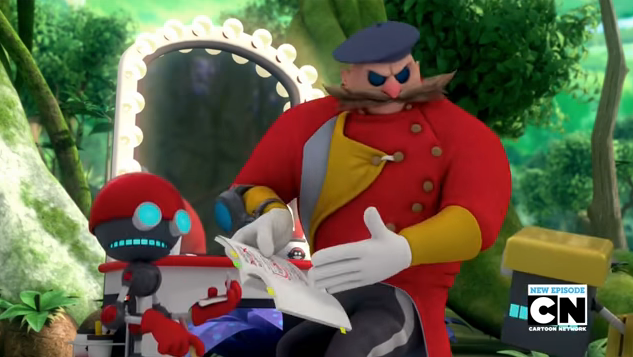 It's another day in paradise and Sonic and Tails are busy patronizing Meh Burger. The two hear a rumbling in the distance and, deducing that it wasn't just Sonic's empty stomach, rush to investigate. Cut to Eggman's Obliterator Bot, seemingly obliterating the town. As usual. Sonic and Tails easily fell the giant robot, but it turns out that Eggman isn't up to his usual nefarious schemes. He claims to have been filming a scene for his new movie, and offers Sonic a role in order to salvage his script. Sonic, suspecting foul play at work, declines and leaves the scene.

Later, Amy takes Sonic to Eggman's latest film shoot, where Eggman has employed Dave the Intern to portray an incredibly slow-witted and dopey characterization of Sonic. Sonic, of course, takes offense to this. Eggman proposes that if Sonic agrees to star as himself in Eggman's movie, then he'll get creative control over his own portrayal. Amy convinces Sonic to take the offer and Dave is sent back to catering duties.

Everything goes swimmingly for a while (except for Knuckles, Sonic's stuntman), but eventually Sonic reads the rest of the script and confronts Eggman over its blaring gaffes and contradictions. Tails manages to rework it that night into something more manageable, and the next day Sonic demands that Eggman accept the new draft or he walks. Eggman refuses, but not before throwing a tantrum that would make James Cameron blush.

Sonic is back to his usual shtick of bumming it at the beach, when Orbot and Cubot sheepishly ask for his assistance. Turns out Eggman's movie-making was just a cover to drill for Unacquirum, a metal that he'll use to make new, deadlier robots and render Orbot and Cubot obsolete. Sonic jiffies to the movie set and finds Drill Bot (which is just Obliterator Bot with a new drill attachment) boring for the mineral. Sonic once again takes out a giant robot in a showy fashion, but quickly discovers that Eggman's ruse was also a ruse: The Unacquirum story was bunk and using footage of Sonic defeating Drill Bot, Eggman has filmed the final scene of his movie. Eggman rushes off giddily, presumably to do some editing.

Eggman's movie soon premiers on his island headquarters, and everybody from the village has been invited. The flick turns out to be a rather melodramatic piece about one mad scientist's dream to build an evil amusement park, but in spite of this (or, actually, probably because of it), everybody laughs out loud whenever Eggman delivers his lines. Eggman berates the crowd and wonders out loud why they aren't all hypnotized. Turns out that Eggman was so wrapped up in making his movie that he forgot to install mind-control equipment on his camera, as originally planned. His triple-ruse having failed, Eggman tells everyone to beat it, and settles for watching his film by his lonesome. At the very least, he seems genuinely moved by his own work in the end.