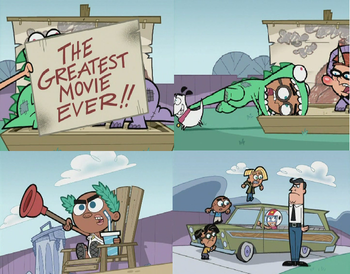 At least it was funny...
Advertisement:

At some point, everyone has imagined themselves acting on the big screen or working behind the scenes of a major motion picture. Just as amateurs in real life will attempt to make films using their friends and a camera, fictional characters also like to try their hand at film-making.

Maybe they're entering a film contest or just having some fun. Maybe they want to make a full length movie, a short film, or a simple class project. They might be working together with a single vision or fighting over creative control. At times they're just the cast, acting despite being amateurs who may or may not have creative control. Whatever the scenario, they're stepping outside of their usual activities to create a film of some sort.

Results may vary, with the films most often ending up incredibly amateurish at best and objectively bad at worst after a Movie-Making Mess ensues. More talented (or simply luckier) characters will end up with a successful film, and perhaps an interest in creating more movies. The finished products often end up as parodies of real-life franchises, Le Film Artistique, a parody of True Art Is Incomprehensible, or something extremely simplistic, depending on the characters behind the camera. The more wealthy characters will easily be able to get professional resources and even actors, and are often the antagonists challenging the protagonists' own film-making efforts.

To apply, a story need not be specifically about making a live-action movie; animated projects and other film work is acceptable as long as the general plot pattern fits. Live-action work is simply the most common form.

Compare Musical Episode, School Play, Hey, Let's Put on a Show and Show Within a Show for the movies themselves. Contrast Set Behind the Scenes. Not to be confused with an episode about the out-of-universe production of the series or an episode where the characters are the subject of an in-universe movie but are not otherwise involved in the production.

Can be Truth in Television, thanks to modern technology making entry-level moviemaking fairly accessible to anybody with a digital camera (or even cellphone), a computer, some kind of video-editing software, and a bit of spare time. Nowadays the results may become a Web Video.

Arthur and his friends are too young to see the latest "James Hound" film, so they decide to make their own using Muffy's new camcorder, and of course hijinks ensue!

Arthur and his friends are too young to see the latest "James Hound" film, so they decide to make their own using Muffy's new camcorder, and of course hijinks ensue!