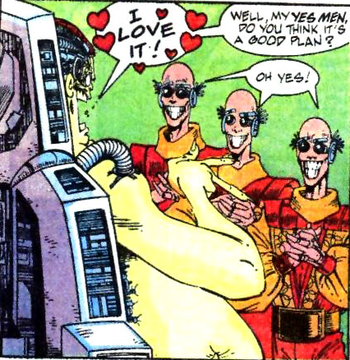 Burns: ...I see it all now. You're just a bunch of yes-men. I was making the wrong moves, and you were too gutless to tell me! Isn't that right?
Assistants: Yes, sir.
Smithers: Dead on, sir!
— The Simpsons
Advertisement:

A great assistant provides their boss with the things they need to do their job. This can mean an organized schedule, up-to-date research, fielding calls, or taking on the small tasks.

For some assistants, however, it means kowtowing, flattering, and generally blowing smoke up the posterior areas of their superiors. This is the domain of the Yes Man.

For them, their boss is the be-all and end-all of their world. If the boss says "Jump!", the good Yes Man says "How high?" The great Yes Man already knows, and follows up by apologizing that his leap was not worthy. The boss may not need or desire this, of course... but if they're a Control Freak, a Neidermeyer, or a Pointy-Haired Boss, you can be sure they'll have or want a Yes Man. Sometimes, they'll have a team of them, led by the Alpha Yes Man.

The reasons for this behaviour can be anything from unshakable love, to spineless fear, to a desire to borrow the power and status of the boss by association. The last type is often the one most likely to act like a mini-tyrant to others when the boss isn't around.

The Yes Man is often not very good at his job, though this is not always the case. Sometimes, most notably when the boss's actual ability is lacking, they can be frighteningly efficient. Go far enough to the extreme in this, and you get the Battle Butler.

The Dragon is sometimes the Yes Man, though just as often goes to the opposite extreme. The Professional Butt-Kisser is almost indistinguishable from the Yes Man, except their devotion is to the position rather than the boss, so they'll treat anyone who gets, steals, or kills for the job the same as their old boss.

Of course, even exceptionally devoted Yes Men can be pushed too far, especially by an over-demanding or bullying boss... and if they are, then the boss had better be careful; The Dog Bites Back.

Also note that yes man trope refers to people who generally behave like this. Occasional instances of this behaviour does not qualify. Even Dilbert and Alice from the Dilbert comic occasionally ends up pretending to agree with their moronic Pointy-Haired Boss, usually simply because they realize he is too thick-headed to understand why he is wrong. This certainly does not make them yes man and woman. They normally give their boss the respect he deserves (absolutely none) and Alice is even occasionally physically abusive of him.

Not to be confused with the guerilla activist/comedy hoaxters, The Yes Men. For the Jim Carrey film, click here.

Compare Sycophantic Servant, Opinion Flip-Flop. Contrast Commander Contrarian and Honest Advisor. Compare and contrast Servile Snarker and Hypercompetent Sidekick, who usually let their boss think they're one of these. See also I Don't Pay You to Think for when the boss apparently expected an employee to be a yes-man, but they didn't get that. In some settings, this trope can also lead to, or even be just one part of the Blind Obedience trope.

Marik is quite annoyed when he learns that his brother/minion's only job is to just say "Yes, Master Marik."

Marik is quite annoyed when he learns that his brother/minion's only job is to just say "Yes, Master Marik."