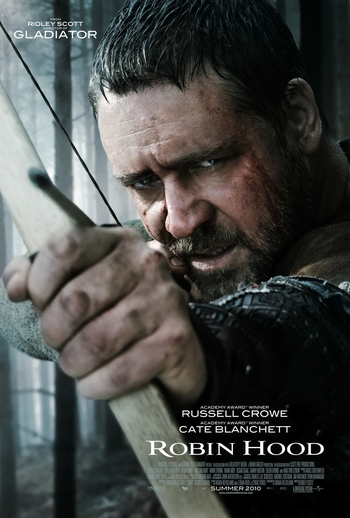 The film distinguishes itself from previous Robin Hood films in that, like other then-recently rebooted franchises like Star Trek (2009) and The Dark Knight Trilogy, it offers an expanded origin story for the hero, showing how he met his supporting cast and how he became an outlaw. However, the fictional elements of the film's origin story are made up for the film itself, and familiar folkloric elements are not depicted, or at least not in the usual way. The film connects Robin's origins with historical tensions between King John and his nobles. Historical liberties taken are extreme.

The Third Crusade is over, and an archer of murky origins named Robin Longstride deserts the English army together with his friends. He comes across a dying knight who sets him off on a quest to discover the secrets of his past. Meanwhile, England is beset by troubles from within and without. A newly crowned king's incompetence proves taxing, the nobles are restive, the common people face impending poverty and hunger, and a traitor is working with foreign powers to cripple the kingdom. Robin's journey takes him to the English royal court and to the struggling town of Nottingham, where he finds his true heritage and true love, and rises at England's hour of need to burst into legend as "Robin of the Hood".

The usual storyline, about the nobleman Robin being outlawed, making trouble for the Sheriff of Nottingham, and Storming the Castle at the end to save Maid Marion (the one used by Douglas Fairbanks' silent Robin Hood, Errol Flynn's The Adventures of Robin Hood, Prince of Thieves, Men in Tights, etc.) is hardly covered here — this film is more of an Origins Episode for that heroic outlaw.

Unlike some other Robin Hoods and like one other (Sean Connery and Audrey Hepburn's Robin and Marion, which featured Robin at the end of his career), the film is mostly set in the reign of King John and only features his brother Richard the Lionheart at the start (and he dies by a French crossbow shot instead of needing to be ransomed). The film also includes more Historical Domain Characters than is usual for Robin Hood films. Aside from Kings Richard and John, Queen Mother Eleanor of Aquitaine, John's wife Queen Isabella of Angoulême, the English court official William Marshal and King Philip Augustus of France all have roles in the plot.

Like most previous Robin Hood films, this movie has its own beat and style. It is an Adaptation Distillation of centuries of oral and written tradition, and book, television and film treatments. Most of the familiar story details everyone knows only developed through the centuries, including the association of Richard and John, Robin being a knight, a Storming the Castle climax, and even Robin's shtick of robbing the rich and giving to the poor.