Theatre / The Lion in Winter 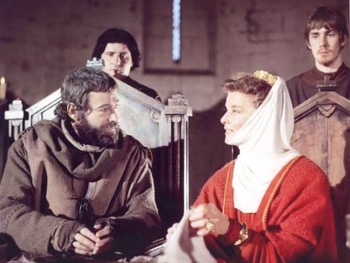 Henry and Eleanor, at the very least appearing to be civil to each other.
"Well, what family doesn't have its ups and downs?"
— Eleanor of Aquitaine, vastly understating matters
Advertisement:

A 1966 play written by James Goldman, about the troubles in the family of Henry II of England and Eleanor of Aquitaine.

Henry's three sons, John, Geoffrey and Richard, all aspire to succeed him as king. (A fourth son, Henry the Young King, is recently deceased.) Both he and his wife favour a different son; since she once instigated rebellion against him before, Henry has kept her locked up for ten years, but this experience hasn't dampened her spirit. The power play begins in earnest in 1183, when this lovely family goes to celebrate Christmas in their palace at Chinon along with King Philip II of France, whose older sister Alais is Henry's mistress.

The play's original Broadway run featured Robert Preston as Henry, Rosemary Harris as Eleanor, and Christopher Walken in his Broadway debut as Philip. A film version, featuring a screenplay adaptation by Goldman, was made in 1968, directed by Anthony Harvey and starring Peter O'Toole as Henrynote It was actually O'Toole's second appearance in the role; he'd also played Henry in Becket, released four years earlier. and Katharine Hepburn as Eleanor. It also marked the feature debuts of Anthony Hopkins, as Richard, and Timothy Dalton, as Philip. The film received seven Academy Award nominations, winning for Best Actress (Hepburn), Adapted Screenplay (Goldman), and Original Score (John Barry).

A made-for-TV adaptation, directed by Andrei Konchalovsky and starring Patrick Stewart and Glenn Close in the leads, first aired in 2003.

The Lion in Winter provides examples of:

Alternative Title(s): The Lion In Winter