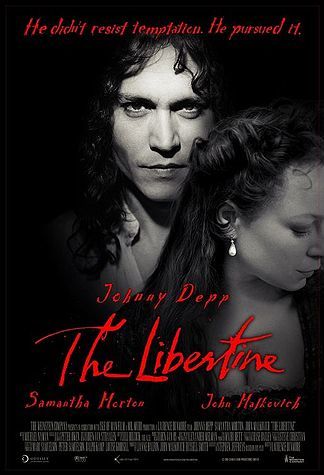 The Libertine is a 2004 British drama film directed by Laurence Dunmore, starring Johnny Depp, John Malkovich, Samantha Morton and Rosamund Pike. It was adapted by Stephen Jeffreys from his own play of the same name, in which Malkovich had played the title character.

The titular libertine is John Wilmot, 2nd Earl of Rochester (Depp), a notorious rake and poet in the court of King Charles II (Malkovich). He meets Elizabeth Barry (Morton), an actress whose budding talent blossoms and makes her much in demand under Rochester's tutelage. Wilmot and Barry become lovers. King Charles II, meanwhile, is torn between his great friendship with Wilmot and the danger posed by his displays of contempt for his monarchy. Pike plays Elizabeth Wilmot, Countess of Rochester; John's wife.

Has nothing to do with the 2000 French film The Libertine.

The Libertine provides examples of: