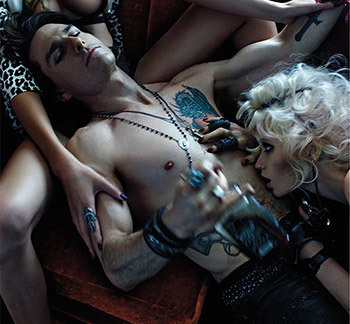 "Kids, don't buy drugs. Become a rock star and they give 'em to ya for free!"
— Billy Mack, Love Actually
Advertisement:

The Power of Rock is awesome! Why? Well, what problem do you have that wouldn't be solved by an awesome guitar solo, an elaborate dance routine, and a heartfelt song with kickass drums? Whose life can't be saved by "Stairway To Heaven"? Rock solves all, right?

On the cynical end of the scale, rock is actually pretty screwed up. Drugs are prevalent throughout the culture, rock musicians themselves use their inflated stardom to become real-life Karma Houdinis, and the whole scene is decadent on the top and seedy on the bottom. The consequences are emphasized more than the fun in this view.

Portrayals can be broadly divided into two types of Sex, Drugs, and Rock and Roll. The hedonist sees all that is available with their fame and money, taking advantage of it until they wake up with a hangover. The escapist has a Dark and Troubled Past, uses drugs to escape their pain, sex as a replacement for intimacy, and music as an outlet for their anger. There's also a related type that falls into illicit substances or encounters seeking Artistic Stimulation.

Media portrayals often cross this trope with the Eccentric Artist, Addled Addict, or the British Rock Star for maximum craziness.

Not so much a response to The Power of Rock as an exposition of Real Life. Certainly Truth in Television, but often exaggerated in media for added effect, and mostly averted in Real Life. Also Older Than Dirt, being well documented at least as far back as Ancient Egypt; the similar phrase "wine, women, and song",note "And women." attributed to Martin Luther, dates back to at least the 16th century.

Hookers and Blow is the Super-Trope. Often goes hand in hand with Three Chords and the Truth.

Also compare to tropes about Sex, Drugs, and Rock & Roll.