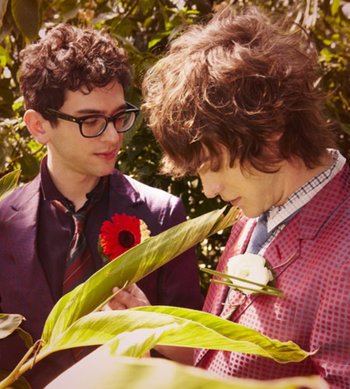 This is our decision to live fast and die young, we've got the vision, now let's have some fun! note L-R: Ben Goldwasser and Andrew VanWyngarden
Advertisement:

MGMT, formerly known as The Management, are an American neo-psychedelic rock band from Middletown, Connecticut. They started out making trippy, catchy pop music before becoming an equally trippy pastiche of 60s and 70s rock with Congratulations, and then moving on to more experimental and electronic- influenced music in their 2013 album MGMT, before (somewhat) returning full circle to catchy pop with 2018's Little Dark Age.