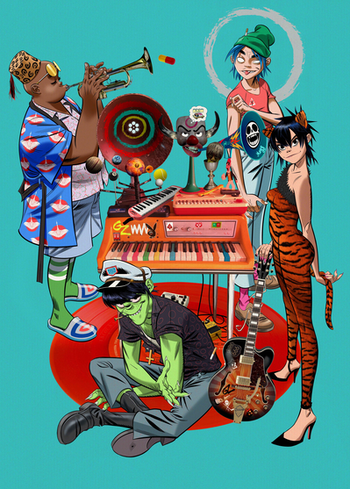 Feel good.note left to right: Russel, Murdoc, 2D, Noodle.
"'Always be wary of people who use quotes.' I don't know who said that."
— Murdoc Niccals
Advertisement:

Gorillaz are a virtual band created in 1998 by Blur frontman Damon Albarn and Tank Girl co-creator Jamie Hewlett. In 2001, they were recorded in the Guinness Book of World Records as the "Most Successful Virtual Band".

The band consists of four animated fictional characters: Stuart "2-D" Pot (vocals and keyboard), Murdoc Niccals (bass guitar), Russel Hobbs (percussion), and Noodle (lead guitar). These characters are completely fictional and do not represent any real-life musicians involved in this project. Aside from live performances during Escape to Plastic Beach World Tour (and to a lesser extent, Demon Days Live), Gorillaz' 'real-life' musicians change for each album (with the exception of creator Damon Albarn) and usually stay behind the scenes while Gorillaz are credited as the real band.

The band's genre is...complicated. While their earlier work was often categorized as trip hop, even that discounted the overt influences they took from alternative rock, hip-hop, dub, electronic music and pop, which have only given way to further experimentation in their later years.

The virtual band was created as a commentary on MTV often putting more of an emphasis on the musician than the music itself, having a discrepancy between the visuals and the music. To prove that musical groups could be executed in a more interdependent fashion, they created fictional backstories and put much emphasis on the animation and cartoons.

While the band's backstory was initially presented through various interviews and promotional material, it was eventually all pieced together through their 2006 autobiography, Rise of the Ogre. The entire storyline of the band breaks down into "phases" generally surrounding the rollout of each album; it currently consists of five completed phases, with the second season of the sixth phase currently underway.

In January 2020, the band announced a new project called Song Machine, revealing that they would be moving away from the traditional album format, instead shifting to a series of periodically-released singles involving an ever-revolving roster of collaborators, with the song "Momentary Bliss" serving as its first "episode". In May 2020, it was announced that Gorillaz would release a new graphic novel in October 2020 called Gorillaz ALMANAC featuring comic strips, new and old artwork, games, puzzles, and special guest appearances from various Gorillaz collaborators, with a physical copy of Song Machine: Season One – Strange Timez included with each issue.

Now with a Character Sheet!