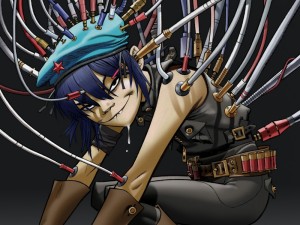 For several decades, Western Animation has portrayed cartoon bands as wild and wacky, with names like The Banana Splits, Josie and the Pussycats and the Neptunes traveling around the world and solving mysteries, imprinting on popular culture the idea that an animated band would be a family-friendly affair. That all ended with Gorillaz. Instead of talking animal sidekicks and hilarious chase sequences, they gave us zombies, kidnappings, severe head injuries, demonic shenanigans, preteen superweapons, haunted landfills, undead apes, vehicular homicide, giant whales, Dickensian stepfathers, violent foodfights, DIY taxidermy and painkillers.

Rise of the Ogre: