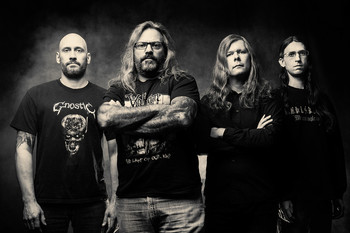 Gorguts are a Canadian Avant-Garde Technical Death Metal band. They formed in 1989 with Luc Lemay (vocals and guitar), Sylvain Marcoux (guitar), Éric Giguère (bass guitar) and Stephane Provencher (drums) as the original lineup. After a deal struck with Roadrunner with their demo, they released their debut album, Considered Dead, in 1991, later being re-released in 2004 on the same disc with their sophomore effort, 1993's The Erosion of Sanity. The first two albums are old-school death metal and are regarded as atypical efforts for the band, although many (perhaps most) fans still regard them very highly. The band began to experiment more on the second album, incorporating pianos and acoustic guitars into their sound, although it was nothing compared to what would come next.

The songs the band composed for their third album, Obscura, were a complete departure from anything they or anyone else had done (arguably, only Demilich had done anything remotely comparable), and consequentially, they had a difficult time finding a record label to release their material. Their new material essentially dispensed with any traditional metal conceptions of melody, using 20th-century Classical composers such as Dmitri Shostakovich and Krzysztof Penderecki as inspirations, plus Eastern musical traditions (particularly Indian). As a result, the album sounds incredibly dissonant and atonal to first-time listeners, though most songs do eventually reveal melodic hooks after repeated listening. The album is generally considered their Growing the Beard moment (fittingly, because the album cover depicts a bearded man sitting in the lotus position) where they established their Signature Style, and not merely their greatest work but one of the greatest Death Metal albums of all time, if not the greatest. (It has also been repeatedly compared to Captain Beefheart's Trout Mask Replica, almost to the point of Memetic Mutation.) Although many of the songs were written as early as 1993,note The last two songs composed, ironically enough, were the Title Track and "Nostalgia", two of the best-known songs on the album the album would not appear until 1998. By this point, Lemay was the only original member left.

When Steeve Hurdle left, the band got yet another new lineup, which appeared on their fourth album From Wisdom to Hate. This album can be considered something of a fusion of the Obscura style with the sound found on their first two albums; it keeps the weird Eastern and 20th-century Classical-inspired melodies but uses more traditional song structures. Tragically, drummer Steve MacDonald ended his life in 2002, leading to Gorguts' split.

In 2008, however, Lemay reformed the band with yet another new lineup at Hurdle's suggestion. (In the intervening time, Lemay and Hurdle had been working together in the similar tech death band Negativa, which released one EP in 2006 that is essentially a Gorguts release in all but name. Unfortunately, Hurdle's death in 2012 put an end to Negativa.) The band spent five years working on new material before releasing their fifth album, Colored Sands, in 2013.note The album was leaked two months in advance; label Season of Mist released the album digitally a month later, but a month ahead of schedule. Colored Sands is a Concept Album about the history and culture of Tibet, with greater influence from Progressive Metal acts such as Porcupine Tree and Opeth and a greater emphasis on dynamic shifts. The album also contains a neoclassical instrumental performed by a string quartet, "The Battle of Chamdo". It has received great acclaim.

As of March 2014, John Longstreth is no longer a member, as his schedule with Origin was incompatible with that of Gorguts. Patrice Hamelin has been manning the kit live since 2011, and is now credited as an official member in the packaging of the band's first EP, the 2016 release Pleiades' Dust. The EP consists of a single thirty-three-minute song centring around the House of Wisdom, a library in Baghdad during Europe's Dark Ages. Many innovations that we now take for granted, such as algebra and a number of astronomical discoveries, were developed at the House of Wisdom. At the time, it was the largest library in the world, and scholars from all over the world flocked to it. Stylistically, Pleiades' Dust is to some degree a continuation of the sound found on Colored Sands, with the main difference being one of structure, though Lemay cited the French Black Metal act Deathspell Omega as an influence on the EP.

Gorguts are one of the most acclaimed death metal acts out there, but their music is not for everyone. Due to the extreme intensity of their music and their abandonment of familiar harmony, it is common for first-time listeners to find it frightening, but repeated listening does reveal nuance and harmony underneath what initially sounds like noise. It may take a lot of effort to penetrate all the layers of their music, but it can be extremely rewarding to do.

This band provides the examples of the following: